Weight gain during pregnancy is unavoidable and desirable to provide the foetus with all the nutrients required for its development. However, no standard number of kilos is indicated for all pregnant women at all stages of pregnancy because, while this weight varies from one woman to another, it differs according to the trimester. 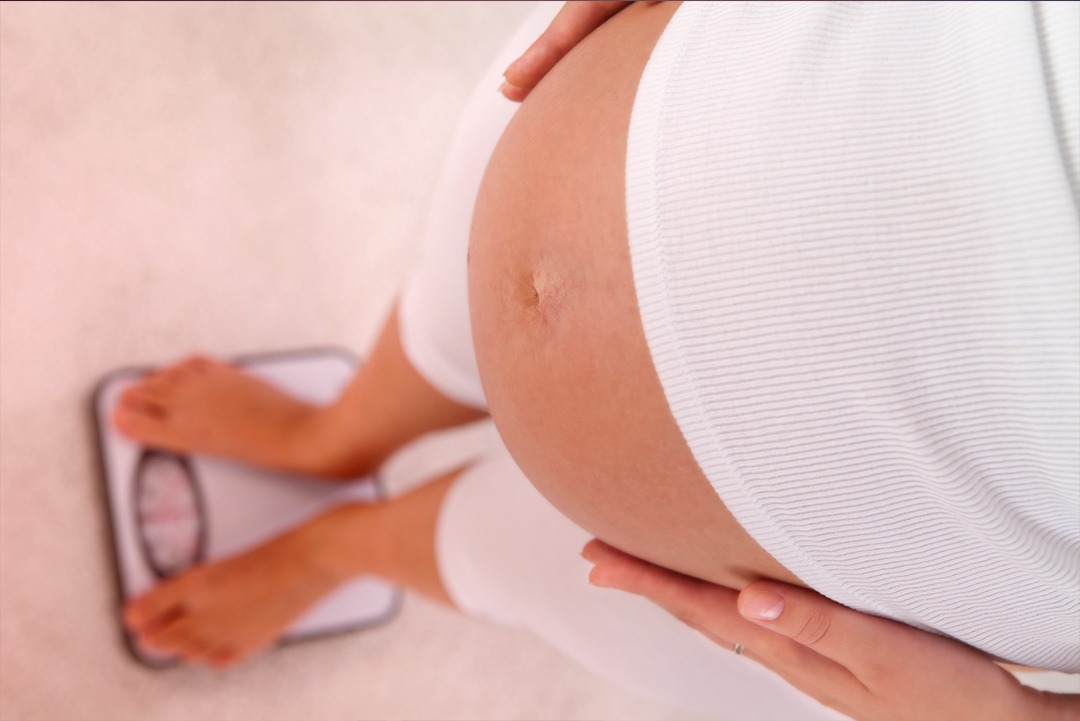 Why does a pregnant woman gain weight?

Gaining weight while you are pregnant is normal. This can be explained by the following changes in the pregnant woman's body:

- The formation of the placenta: an organ specific to pregnancy, allowing the foetus to be oxygenated and fed;

- The development of the foetus: This grows progressively, gradually increasing in weight. However, the foetus gains the most weight in the last trimester, reaching an average of 3.5 kg according to the criteria established by the French National College of Gynaecologists and Obstetricians.

The ideal weight during pregnancy

In France, no official recommendation of an ideal weight for pregnant women exists. The American Institute of Medicine recommends that women who were at a healthy weight before becoming pregnant only need to gain between 11 and 16 kg during their pregnancy; this increases for twin pregnancies.

If your BMI is below 18, it is recommended to gain between 12.5 and 18 kg during the pregnancy. An overweight woman should gain as little weight as possible to avoid complications.

What weight for what trimester of pregnancy?

A woman's weight during a pregnancy cycle is not static but varies from one trimester to another.

The increase in weight is expected to accelerate in the following months. It may even reach a gain of 1.5 kg each month for women with a normal BMI.

Weight gain in this phase of pregnancy can be 1 or 1.5 kg per month. However, it is not unusual for some women to gain up to 2 kg per month in this last trimester.

Why shouldn't you gain too much weight?

The risk of giving birth by caesarean section

The Canadian Council of the Society of Obstetricians and Gynaecologists has approved a study concluding that obese pregnant women have a higher risk of having a caesarean section and are less likely to have a vaginal delivery following a first caesarean section. The causes of this situation are pre-eclampsia, failed induction and maternal-foetal disproportion.

The option of a caesarean section avoids potential shoulder dystocia due to foetal macrosomia; it also avoids a potential delivery haemorrhage, according to studies conducted by researchers at the University Hospital Centre of Angers to establish a link between obesity and the course of childbirth.

The risk of spontaneous abortion

Approximately 10% of pregnant women are affected by this condition, which particularly manifests in increased blood pressure. According to WHO statistics, eclampsia and pre-eclampsia are the two main hypertensive disorders that complicate pregnancy. However, effective management offers the possibility of a normal delivery.

In obese women, the prevalence of gestational diabetes is 19.1% and 11.1% in overweight women. According to the results of a comparative survey conducted in 2012 by EPIFANE between pregnant women with a normal BMI and obese pregnant women, the latter are three times more exposed to severe risks of developing complications during their pregnancies. Moreover, according to the conclusions of the same study, obese women are five times more likely to develop gestational diabetes.

Generally, these problems include the difficulty of returning to normal weight after childbirth (only one in two women does so after one year), the delivery of an overweight baby, the risk of developing baby blues, premature delivery and excess perinatal mortality.